Beginning January 1, 2013
all Reviews may be found here.
Stop by the new site and take a look around. 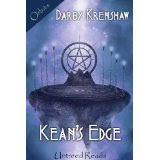 Petty thieves Kean and Ozzy are recruited by an eccentric collector to smuggle outlawed treeware. When the pickup goes wrong, they are hunted through the streets of Morocco. Running for their lives, they discover what lengths each will go to to save the other.

When physical books are outlawed only outlaws will own them.

As children, Ozzy and Kean forged a bond so deep that as young adults they almost seem to share the same mind. When I started reading I honestly didn’t know if I’d like these characters because our moral codes are so dissimilar. They’re career criminals who will break almost any law if it benefits them or someone they love and I’ve never even had a traffic ticket. No sooner does the plot pick up speed, though, than the reader learns about a dark secret that one of them has hidden from the other. The exploration and aftermath of this secret humanizes a terrible decision and drew me even further into their world.

I would have liked to see a more detailed explanation for why the Central Information Council transitioned from preserving paper books to banning them. What could make a benevolent organization evolve totalitarian tendencies so rapidly? For what purpose was this change introduced? As much as I enjoyed learning what happened to Kean and Ozzy not having these questions answered was disappointing. There were also some paragraphs in the story that were a little hard to understand due to multiple punctuation errors.

The end of this tale was fairly predictable for the genre but it did leave ample room for a sequel. We say goodbye to Ozzy and Kean while they transition from finding answers to questions that have plagued them for a long time to encountering brand new challenges. While I don’t know if the author intends to revisit these characters I’m curious to know what happens to them next.

Despite these issues Kean’s Edge introduced me to a world I won’t soon forget. Imagine a society that so fears the written word it is attempting to stamp it out. Is it better to try to move elsewhere or fight for lasting change from within? Are these your only options? Why not read this book and find out!

Posted by The Long and the Short of It Admin at 4:00 AM

PLEASE NOTE: Comments that are demeaning, cruel or profane will be deleted.

While we gladly welcome and encourage comments relevant to our reviews, we ask that no outside links be added to the comments. This request is made in an effort to discourage spam and phishing sites. Therefore, all comments that include outside URLs and links will be deleted.

In compliance with recently updated FTC Guides Governing Endorsements, Testimonials, etc., please be advised that the majority of the books Long and Short Reviews reviews are provided free of charge by various publishers and authors, though we also review many books procured by our reviewers from the library or self-purchase

1 Star — At this time, we at LASR do not post these reviews. If the book was boring, badly edited, poorly written, had little or no plot, stilted dialogue, and/or unsympathetic characters, we will decline the review.

2 Stars — Not wonderful, but tolerable. There may be some minor editing glitches but not enough to stop you reading. Not a wall-banger, but nothing you'd re-read. This is a book you would borrow from the library - not buy - and never check out again.

3 Stars— Good. Mostly enjoyable. You made it through and didn't consider it a waste of time or money. The story was strong enough or the conflict tight enough, so even when the book faltered, it was able to draw you back in and keep you. There's a chance you'll recommend it to a friend, but it wouldn't go on your keeper shelf.

4 Stars— Very Good. You're glad you were the one who got to review the book. You would probably buy it and would definitely recommend it to your friends. You liked the characters and the plot. The writing style was good and the editing clean.

Best Book - For a book or story that is truly exceptional. You think about it when you're not reading it. You wonder what happens to the characters when you finish. You would absolutely buy everything else this author had to offer. The highest praise - and reserved for only a few.